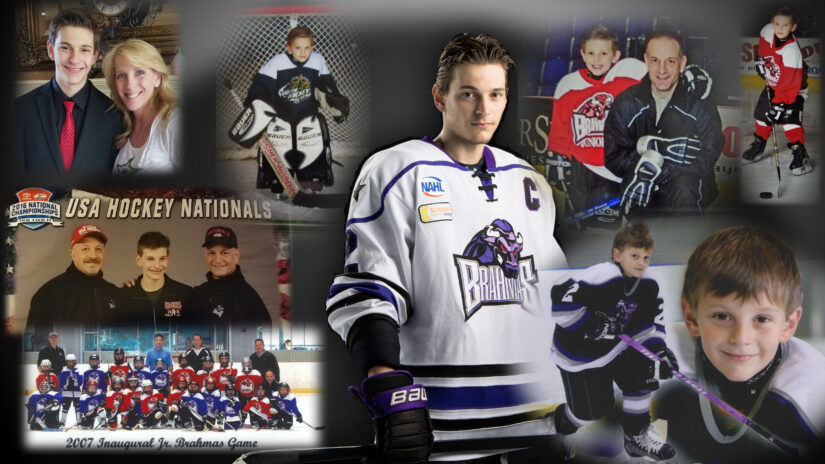 May 1st, 2021 is a date that undoubtedly weighs heavy on Lone Star Brahmas Captain Joey Trazzera’s head. This date marks the last regular season home game where he will be wearing a Brahmas jersey. For the entire length of his hockey career he has been able to call NYTEX home. From playing in the very first Junior Brahma game in the NYTEX Sports Centre back in 2007 to May 1st, 2021 Joey has played 1009 games as a Brahma.

While the season will not end on May 1st, the regular season home routine will. The next time the Brahmas play at home after May 1st will be in the first round of the playoffs, and a new quest will begin. The quest to win a Robertson Cup. That is the last box left for Joey to check off before his career shifts to the post Brahmas era. The Texas Brahmas Youth Hockey Association President, Chad Siewert, had this to say when asked about Joey’s tenure with the Brahmas, “Joey embodies what it means to be a Brahma. He has put in the work, he has sweat, he as bled, and he has shed tears for this brand. We hope that the next Joey is somewhere in our youth leagues watching, learning, and preparing to take the torch.”

Joey was just a young boy when his family purchased the ruins of the former Blue Line Ice Complex. He watched as the building was transformed from a cavern of broken glass and graffiti into a house of hockey that would become more of a second home to him. The Fort Worth Brahmas of the Central Hockey League who had been dormant for the 2006-2007 season would come back for the 2007-2008 campaign under the new name, Texas Brahmas. They would call the NYTEX Sports Centre home, and with their new home they brought in a new coach. That coach was Dan Wildfong, the longtime rival of the Brahmas who plied his craft for the Shreveport Mudbugs before making the jump into coaching.

Joey would watch Coach Wildfong run practices and win game after game inside the NYTEX Sports Centre. Wildfong brought the Brahmas to game 7 of the conference finals in his first year coaching. The next season he delivered the Brahmas franchise their first title. Joey was just 8 years old when he went out on the ice to celebrate the Brahmas CHL victory. In ten short years Joey would hoist the Fraser Cup trophy as the Brahmas took the NA3HL championship to cap off the 2018-2019 campaign.

During the ten years between the first Brahmas title and the Fraser Cup championship Joey would watch Coach Wildfong guide the Brahmas deep in the playoffs year after year. The only year the Brahmas did not qualify for the post season was the 2013-2014 campaign, which, was the first in the NAHL for the Brahmas. The next season the Brahmas would return to the post season with another trip to the final four before a heartbreaking loss to the Austin Bruins.

The 2016-2017 season saw the Brahmas win their first Robertson Cup. Joey’s big brother Frank Jr. was on the squad that year.  When his big brother got his championship ring, Joey said he would one day get one of his own. The 2019-2020 season could have been that year had the pandemic not pulled the rug out from under the sporting world.

This season’s playoff run is titled Unfinished Business, and for Joey, now the Captain of the Brahmas, he plans on finishing the job. The past 14 years have seen Joey grow from a little boy into a grown man. And Coach Wildfong has gone from a rookie coach into one of the most successful hockey coaches around. Through 1009 games as a Brahma, Joey has always had Coach Wildfong to lean on for advice and inspiration.

In addition to playing 1009 games in a Brahmas jersey, Joey played quite a few for Keller High School’s program.  His coach was a former teammate of Coach Wildfong at Shreveport and the Captain of the Brahmas for their first title, Craig Minard.  Will the stars align this season, and see Captain Joey finally grab that Robertson Cup? One thing is for sure, he will give 100% of every ounce of every fiber in his body to the effort. And whenever the season ends, a new chapter will begin for Trazzera, college hockey, and a new quest. The quest to beat his older brother to the first college hockey championship in the family. Always a Brahma, Captain.

Tickets for the final two regular season games are still on sale at LoneStarBrahmas.com.